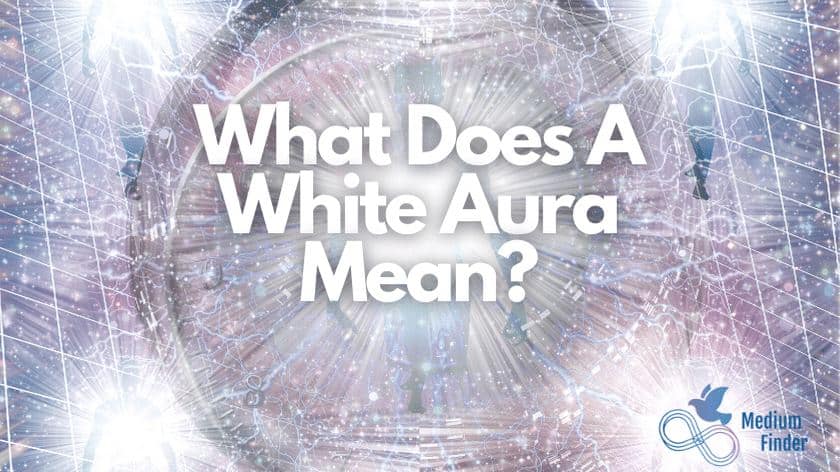 Although there are many different color auras, white auras are the rarest in the world.

To discover why it's rare to come across an individual with a white aura, keep reading to find a useful guide to better understanding the white aura meaning AND how to identify if you or someone you know has one.

What Does A White Aura Mean?

Those who have one often have a high energy frequency and have a strong moral compass.

For example, it's highly unusual for people with them to gossip, lie, or cheat.

While people naturally gravitate to those them, they usually have little interest in popularity or acquiring a status and tend to be much more spiritually focused.

In fact, they them are focused on self-mastery and unlocking their third eye.

For many adults them, their calling in life is to become spiritually enlightened and closer to the source of all life.

Whether they believe in some type of god or feel a strong connection to the energy of the universe which connects all forms of life.

So don't be too surprised if a friend or family member who has one isn't too interested in climbing their career ladder or posting on social media for validation.

Why people with white auras are destined to succeed in life:

Often they are highly successful in every area of their lives. This is due to the fact that they are naturally far more open to opportunities than people with different color auras.

As a result, they'll be far more likely to take up life-changing opportunities which will get them closer to their long-term goals, than the average individual who be may be resistant to change or may only see one possible path towards their goal.

Typically adults with strong white auras will be spontaneous enough to realize that the right opportunity may arrive in an unexpected way and that there are multiple paths to the same destination.

While most people can be too narrow-minded when it comes to being willing to explore new options to reach their end goals.

It's a commonly held belief that people with them have a pure, almost childlike energy that is free of corruption, hatred, and prejudice.

Some people believe that young children are more likely to have one, as children often have a genuine, innocence and still see beauty in the little things in life.

As most adults don't have a childlike innocence, it's thought that white auras are rare.

Others believe that those white auras are new souls who are living through their first carnation on Earth and are less jaded by the challenges of earthly existence.

On the other hand, other groups of spiritualists believe the opposite, that people who are close to spiritual ascension are more likely to have white auras.

The dangers associated with having one:

While having one has many benefits, there is one obvious downside of having a strong white aura.

As they have a tendency to be open to opportunities and to have fewer walls of emotional protection than the average individual, they can be prone to be fooled by manipulative people.

For example, an individual whose aura is white is far more likely to freely give money to a scammer, than an ordinary individual who already has their guard up and is unlikely to believe a fake sob story.

How to protect your energy if you have one:

If you believe that you have one, it may be a wise idea to carry around a protective crystal, in order to protect your energy from people who don't have your best interests at heart.

Alternatively, you may want to use sage to cleanse yourself or your home from other people's negative, potentially harmful energy, especially as burning sage as a cleansing ritual is an ancient ritual that has been used for thousands of years and which can be effectively used to keep your energy free from outside influences.

If you have one it's also worth learning to let your soul's intuition guide you. As for your higher self wants to keep you safe and will give you warnings if someone isn't being honest with you and shouldn't be trusted.

At the same time, your higher self should also give you small signs of confirmation when an individual is trust-worthy and is worthy of your trust and friendship.

What are white streaks?

While the percentage of people who have white auras is low, they will experience white streaks throughout their lives.

White streaks are clear white streaks that can appear in a person's aura for a short period of time.

For example, its thought that some people may exhibit vibrant white streaks in their aura when they are feeling connected to their higher self or are practicing yoga, meditation, or breathwork.

So even if you don't have one, it's definitely possible to experience white streaks from time to time. This is especially true if you're passionate about spirituality and spiritual practices such as reiki and playing chakra-based singing bowls.

If you've always been drawn to spirituality and self-growth and have little to no interest in popularity or status, you may have one, especially if you feel most at peace when you're connected to your higher self and feel at one with the source of the universe.

On the other hand, if you have a colored aura, you may still experience white streaks, when you're in tune with your higher self and have activated your third eye.

How To Do Telekinesis For Beginners

8 Soulmate Signs to Watch For 💏