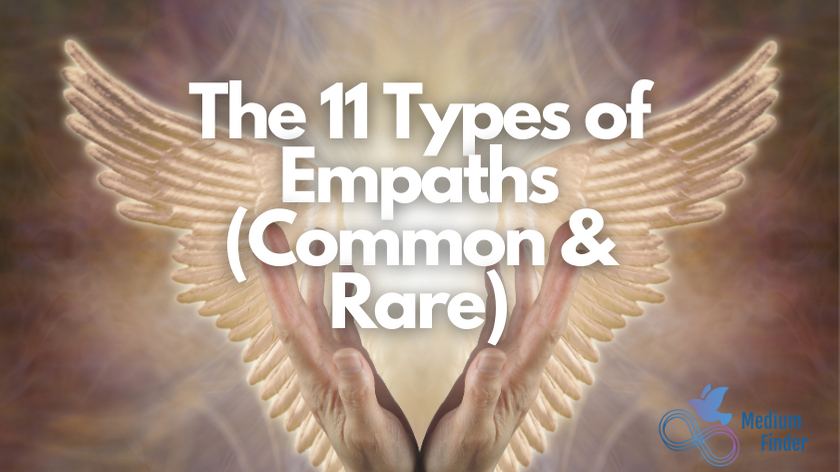 Only a small percentage of the world's population are empaths. If you assumed that all empaths pick up on other people's thoughts and feelings, think again as there are a wide variety and different types of empaths, each of which has a unique set of innate gifts.

To discover the main types of empaths which exist and whether or not you may be an empath, simply continue reading as most empaths fall into one of the groups which are listed below.

By the way, if you're uncertain what an empath is, please head over to this blog post to understand first: What is an Empath?

They are the most common empaths and are able to accurately pick up on other people's feelings.

For example, they can tell when someone is pretending to be happy but is actually going through a period of depression or if a friend has fallen in love with a new partner.

One challenge that they often face is being able to separate their emotions from others' emotions, as unfortunately, they often take on and feel the emotions of the people around them.

For example, if an emotional empath spends a lot of time consoling a friend who is processing grief after losing a loved one, they may become consumed with sadness even though no one that they know passed away.

For this reason, they need to learn how to protect their energy.

This way they can help others deal with their emotions, without taking on other's issues as their own issues. In the long run, they should also learn to prioritize themselves and to say no, if their friends or family members ask them for support when they feel drained and need to take care of themselves. This is so they'll be in a healthy headspace to help others, when they do choose to use their gifts to help others!

As telepathic empaths can sense what others are thinking and feeling, people tend to gravitate towards them and value their friendship.

The reason being, they make their friends feel understood due.

They are using compassionate and empathetic towards others as they know exactly what other people are going through on a deep, personal level.

While emotional empaths typically pick up on other people's emotions, intuitive empaths have the ability to sense what is going on in any given situation.

Due to this gift, they are often able to see the full picture in any scenario, without knowing all of the facts as they'll be able to sense what is really going on.

For example, these individuals will usually know if someone isn't who they say they are and has a hidden agenda, which they should be wary of.

As another example, if they are searching for a new home, they may receive an intuitive warning if a particular house that seems great on paper, is hiding major structural problems.

People in this group should always follow their gut instinct as their higher self can use their intuition in order to warn them about situations or to give them advice, which will help them make the best possible decisions in life.

They have the natural ability to tell what is wrong with people's physical health. For example, they may intuitively sense that a friend is suffering from regular migraines as they don't hydrate enough. They may even sense if a person is experiencing physical health symptoms due to emotional blockages which they refuse to address.

Most physical empaths are always in tune with their own body and can tell when they need to make changes to their lifestyle for the betterment of their health and well being.

For example, they'll know if their body isn't getting enough essential vitamins and nutrients.

While some sense key information about other people's physical well-being in their subconscious, others actually experience physical sensations in their own body.

For instance, they may feel tingling in their legs, if they're talking to someone who has a problem with blood circulation.

Due to their innate abilities, these individuals typically make great doctors, health professionals, or energy healers.

They have the unique ability of being able to sense key pieces of information about people, places, or events through contact with inanimate objects.

For example, if they touch a stranger's piece of jewelry they may pick up on information about the stranger's life and personality.

Or if they touch an old photo, they may get intuitive information about the people in the photo and how they felt, when they posed for the photograph.

These people have a strong connection to the earth and often feel recharged by spending time in nature.

Some of their special talents include being able to intuitively predict earthquakes before they occur and being able to feel the sadness of the Amazon rain-forest being cut down.

Being that they are so connected to the earth, they usually have a soul mission that involves protecting the world and inspiring others to lead more green, eco-friendly lifestyles.

They often feel more connected to animals, than they do to humans and are perfectly content spending a day curled up at home with their pets. Many devote their lives to helping animals and become vets, animal specialists, or animal conservationists.

While others may fill their home, with a wide variety of pets, to help them feel at home. Many animal empaths are able to communicate with animals through telepathy. Particularly with their own pets.

People who have this ability should consider becoming-animal healers, as they'll be able to use their intuition in order to quickly discover what is wrong with an animal.

Plant empaths have the ability to connect with plants and often spend their free time tending to their gardens.

Another gift which plant empaths have, is that due to the peace and tranquility which they feel when they spend time with their plants, they tend to be far less stressed than ordinary individuals.

These empaths receive intuitive messages in their dreams. What makes them different, to ordinary individuals who also can remember their dreams, is that they have the ability to correctly interpret the messages from their dreams.

For example, they may have a dream where a deceased family member gives them insights, which will help them make an important decision in their life.

In some cases they may even receive messages in their own dreams, which are meant to be passed on to individuals in their lives.

They have the gift of sensing events before they happen.

For example, they may feel anxious, before a natural disaster such an earthquake occurs. Or they may feel a sense of overwhelming sadness before an individual which they care about, such as a grandparent is about to pass away.

However, the news isn't all doom and gloom as precognitive empaths are also able to intuitively sense positive events before they occur. For example, they may feel on top of the world, before their are proposed to by the love of their life.

Or they may feel joy out of the blue, before they find out that have been chosen to receive a lucrative promotion.

They have the psychic ability to sense the presence of spirits and are able to communicate with the spirits of individuals who have passed away. In some cases they are able to receive messages from deceased spirits who want to get in contact with those who they have left behind.

For example, a spirit may communicate to a psychic empath that they want to tell their child that they love them and want them to make the most out of their life instead of being consumed by grief.

So if you relate to any of the groups which are listed above, there is a high chance that you may be an empath and may have access to innate gifts which you can use to benefit yourself and others.

How to Unblock Chakras

What Are Precognitive Dreams and Their Symbols?

Yasmin was born in Belo Horizonte, Brazil but now lives & spends her time in New York City. She was Born a 3rd generation natural psychic and created MediumFinder with the sole purpose of giving you the most realistic, reliable & authentic psychic & medium experiences possible! 😊🙏 You Can Read Her Other Posts Here.