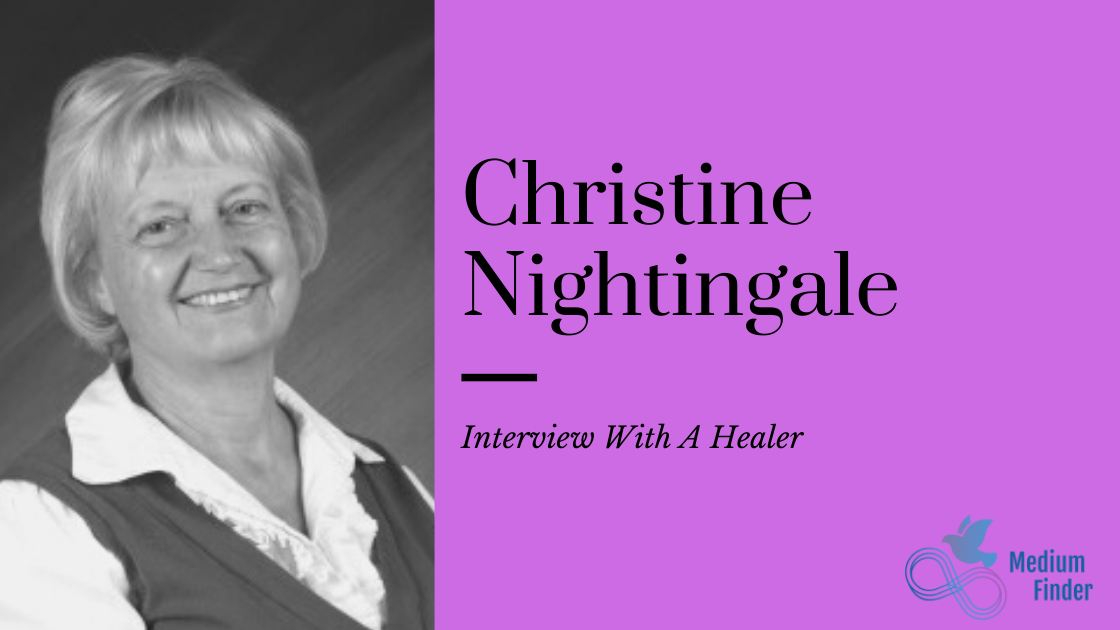 Today I have the great pleasure of chatting with Christine Nightingale, a healer/alternative therapist with over 20 years of experience!

In addition to being specifically trained in Hypnosis for Fertility and Past Life Regression, she uses Reiki energy healing in many of her sessions. Her intuitive skills are also an important part of her practice.

- When did you first realize you had unique abilities?

When I was born.

You see, upon being born I remembered the time just after my last passing when I and three other souls had arrived on the other side. There was a young mother and a 5 year -old boy and a 2-year-old girl. I was a teenager. We had all passed in the Holocaust. We did not remember the exact manner of our passing. We knew that we're in a portal between lives, and we knew that it was our time to plan our next incarnation.

I asked the children what they wanted most. They said they wanted the chance to grow up together, as they had not had it in this lifetime. I asked the mother what she wanted most. She said she wanted to be in the same family as her children. I promised that I would grow up, marry, and in time give birth to the little boy.

I chose my father because he was a UN official in charge of helping Holocaust survivors in a camp after the war. His task was to help them relocate to countries that would accept them. Also, my father’s family had hidden a Jewish woman during the war.

I grew up, went to university, trained as a teacher, and married a minister. We had a little boy. When the boy was 13, he met a girl in his gifted class. They grew up together, married, and had a little girl. When she was 4, she told her mother “before, I was the Mommy and you were the little girl.”

So, just as planned, the little children grew up together, and their mother was in their family(now she was their daughter.)

.(My two granddaughters by my older son have both inherited my gift. My son’s younger daughter started speaking Dutch when she was 2. My son and his wife said they thought she must be the reincarnation of a Dutch person.

So I told them that my beloved Aunt Corrie spoke to me twice after her passing. The first time was right after I got the news from her care home in Holland that she had passed when I heard her voice saying in Dutch, “Love is the only thing that matters.”

A few days later she told me in English that she would come back as one of my grandchildren.

- When did you know that it was your calling, and what inspired you to start your business?

I always loved children. For almost 40 years I was a teacher. My last principal told me that I was better at spotting children who had “fallen through the cracks” than anyone else she knew. I did not tell her that the universe went to a lot of trouble to place at least one child in each of my classes who had an undiagnosed disability.J There was one child who was so brilliant that she had taught herself to lip read ... and no one had figured out that she was deaf! She had been considered unintelligent because she had not learned to read by Grade Four!!!!!!.

I would spot the child who really needed me within the first week. Then, of course, I would get those kids the help they needed.

- What is the most popular type of service with your clients?

- For those who may not be familiar with it, can you explain what Reiki is, and how it works?

Reiki involves taking healing energy from the universe, becoming a channel for healing by putting that universal energy into one's hands, and then placing it on the client, transmitting that healing energy to them.

- How have things changed for you during the pandemic, and how have you adjusted?

I work online exclusively... teaching moms to communicate with their Spirit Babies, which helps the babies to come in successfully.

- What do you love the most about what you do?

Getting baby pictures from clients online. 🙂

- Any final words of wisdom or parting thoughts for our readers in these trying times?

If you want a baby, it is because one has chosen you. There are women who do not want babies; it is they have not been chosen! Thus I see it as my task to help these moms communicate with their future children so that they can become Moms in the flesh.

What Are Runes & How Are They Used?

Angel Number 333 Meaning, HERE’S Why You Keep Seeing It!